Literally meaning: playing a zither towards a cow 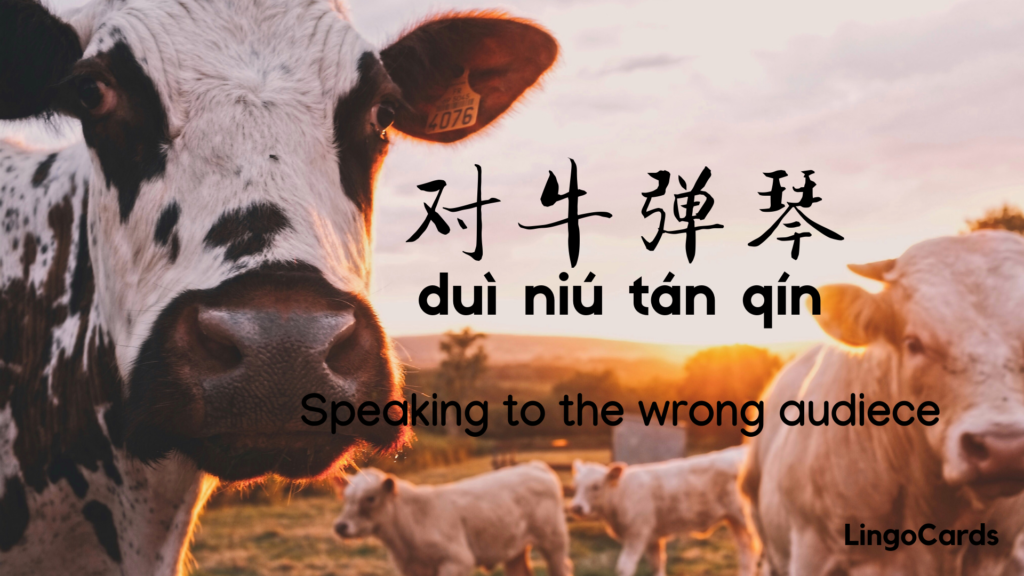 Origin of the Story

In ancient time, there was a musician named Gong Mingyi. He played zither – a traditional Chinese plucked stringed instrument – very well. A lot of people enjoy listening to the music he played.

Once, he went out on the town and saw a cow. He was inspired to play a tune for the cow. Immediately, he set the zither, plucked the strings, and began playing a melodious music for the cow. The cow, however, showed no interest, and just kept on grazing grass. He was surprised, so he switched the song one after another, hoping that the cow would appreciate it. Surprisingly, the cow wandered away without haze after it was well fed.

Gongming Yi was very disappointed. At the time, people consoled him: “It is not because your performance is poor, but just the cow neither understood nor appreciated your beautiful music!”

speaking to the wrong audience.

彈 = to play (a string instrument)

implies that someone who is explaining something to the wrong audience. This idiom is ironically aimed at the ‘fool’ audience rather than the speaker. It is similar to describe “cast pearls before swine” in English.

I have been talking to you for a long time, you do not even understand a word. It’s like casting pearls before swine.